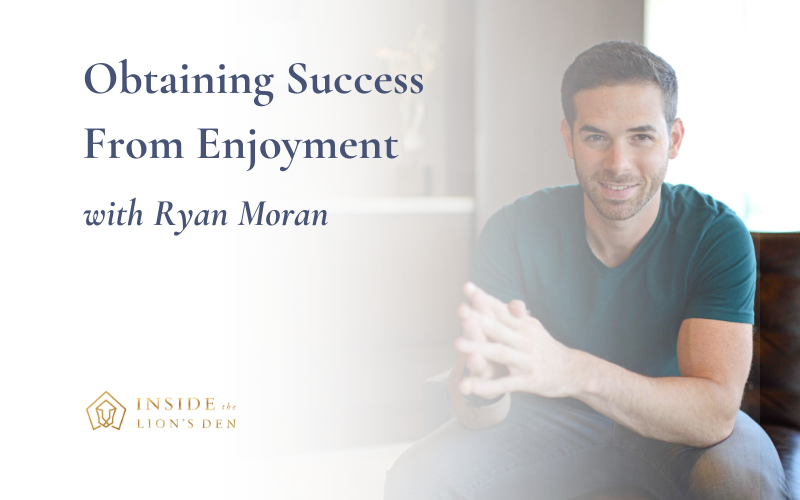 Today’s episode is an interview with Ryan Moran. The CEO and founder of www.capitalism.com. Now as you know, a lot of times when I have a guest on I try and get their upbringing and their full career path to get them where they are today. In this episode I don’t do that. To provide you with more value add I decided to spend more time ask deeper questions. You can learn more about Ryan’s background on his podcast.

In this episode you’ll discover:

Is there one thing that stands out in your mind that you thought, I had no idea about this… that had I known this back then I would have done this differently?

I said it best in my book. “No matter what the cards stay on the table”. What I mean by that is, the further you can roll things into the future the faster things grow. And the only way that you can play for the long term is if you’re excited about what you’re doing right now. If I could go back and talk to my 19 year old self I would just say – follow your excitement.

There is a big illusion that you’ll get to a certain point and you’ll have enough money to not ever have to work again. None of us actually want that. We all just want to just do work that we find meaningful. I wish that I could go back and tell my 19 year old self that now because now at 32 I am now navigating that and what that means to me. And I wish that I had been able to do that in my 20’s.

How do you define yourself?

I just call myself a capitalist. What’s a capitalist? To me capitalism is a mechanism that we use to create change. And money is one of the tools we use in order to facilitate that change.

You’ve had some fairly impressive key note speakers come across the stage… I’m curious, how did you get some of those people on stage?

You never wait for the money before you go do something. You go do something and then you pitch the person on investing. The worst pitches in the world are when somebody has an idea and they’re asking for money. You should at least have a prototype, show sales or show a pathway. Events, networks and connections are exactly the same. I booked the event and I decided that there are going to be people there. And then I went and got the people.

Is there someone you haven’t been able to speak to, network with, or meet? Who would that person be? And why?

Lori Greiner from Shark Tank. A lot of people don’t know that she’s the most successful shark. Not in terms of net worth, but the most successful with the investments that she has made. And it’s often because her skillset so perfectly matches the entrepreneurs she backs.

Penn Jillette of Penn and Teller. I think he’s one of the most fascinating people alive. I’m just really curious about how he views the world. And how he approaches life and thought. He’s a big time libertarian and backer of entrepreneurs. So I’ve always wanted to have him at the event.

What do you want to be doing for businesses in the next 3-5 years of your career?

What do you think you want to be known for?

I hope at the end of my life people say, “Man he had a good time. Man he made the most out of everything that was thrown at him. Man he just sucked the juice out of life”. I hope I leave it all on the table. I hope I have nothing left at the end of it, because I created as much as I possibly could.

Links and Resources mentioned during this episode:

Apply to Work with Me

© 2019 Inside The Lion's Den Podcast. All rights reserved.